Here they are all!

Imagine trying to win a trivia board game. Now try to answer the following questions: What tropics passes through Argentina? Where is the Pampas region? What is the humid pampa? What provinces does the famous Route 40 run through? And so many more questions may arise, at one point because of its geographical richness and on the other hand, because of the surface it occupies.

A little information about Argentina

The Argentine Republic is the fourth largest country in the American continent after Canada, the United States of America and the Federative Republic of Brazil. The Argentine territory on the continent has an extension of 4,361 kilometers between the extreme north and the extreme south, from La Quiaca to Ushuaia. And we are only talking about the continental part because the country also has 965,597 km2 on the Antarctic continent and 3,867 km2 on the southern islands (South Georgia and South Sandwich Islands). If you are interested in knowing more about the southern islands, the French writer Jules Verné makes a precise description in “The lighthouse at the end of the world”.

By extension, due to its numerous biomes and climates, due to its richness in the marine platform and due to the diversity of landscapes, understanding and understanding what each type of map of Argentina represents is not an easy task.

In this article, you will discover which is the best file to download and print, taking into account the characteristics of each map of Argentina and which one would go best with your activity at school.

If you want to know more about Argentina you can see it on Wikipedia . 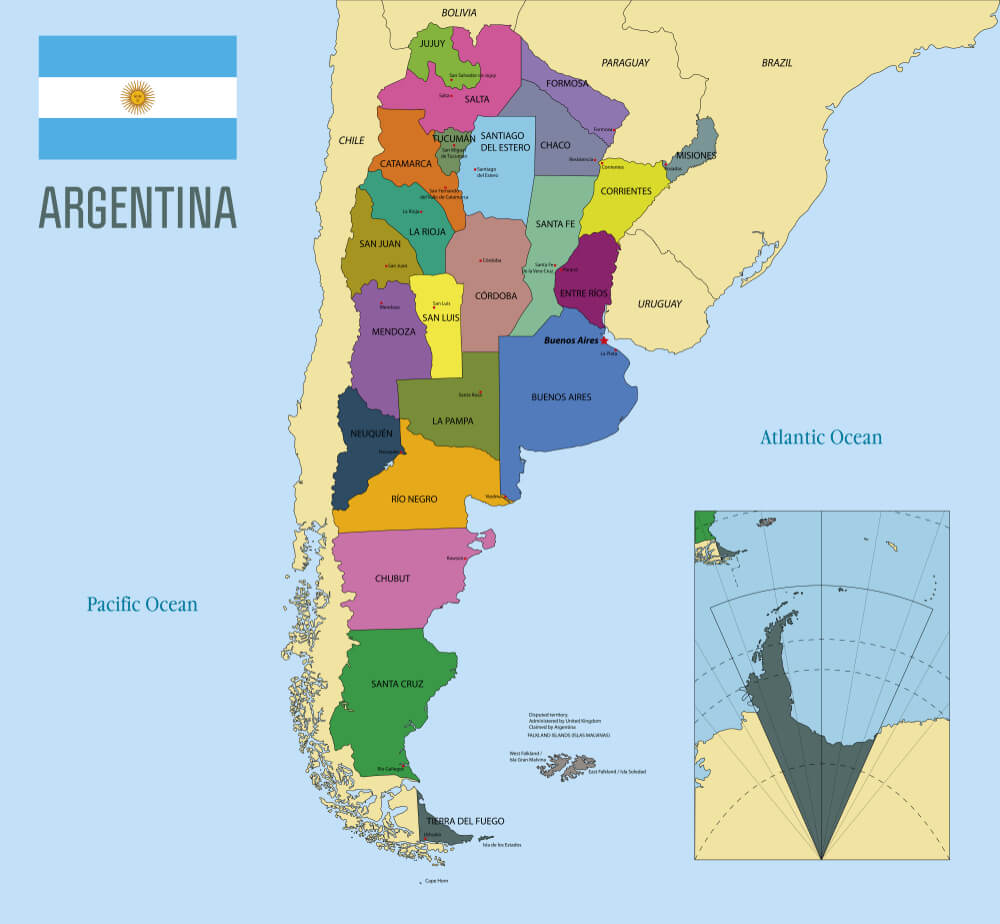 The Argentine Republic is a Federal state made up of 23 Provinces and the Autonomous City of Buenos Aires. The capital of Argentina is Buenos Aires and it is where the highest population density is found and where the seat of the federal government is located despite multiple attempts to move the seat to other provinces.

In this type of maps you will be able to see this political and administrative division and thus recognize where the capital of each province is located, which are the provinces with less extension such as Tucumán and which have access to the sea, among other curiosities.

This last detail is not a minor fact since maritime resources are important in the country’s economy thanks to the vast coastline on the Atlantic Ocean. Likewise, in this type of maps the bordering countries are perfectly demarcated, which in this case are Chile, Uruguay, Bolivia, Brazil and Paraguay.

Since 2010, the Argentine political map has to include both the continental part and the representation of the Antarctic territory, the insular (in other words, the islands) and maritime space.

What is a political map? It is explained in that article .

Argentina is the second country in extension in South America, after the enormous Brazil. You may have heard the phrase “Argentina, the country of six continents”. This phrase chosen to attract tourists is because it has the four climates and an incredible variety of reliefs. On physical maps, diversity and geographic features can be differentiated with the various colors used such as browns, greens, yellows, and light blues.

If you learn what each tone represents, you will not only be able to answer these questions, but you will also be able to divide the country into all its regions: Northwest, Northeast, Cuyo, Pampas plains, and Patagonia. The physical map allows you to know the relationship between the color and its height at sea level, an example of which you can see using the Province of Buenos Aires as an example and seeing how the color changes as you move away from the coast.

What is a physical map? It is explained in that article .

You may also be interested in: Maps of South America .

Map of Argentina with marked rivers 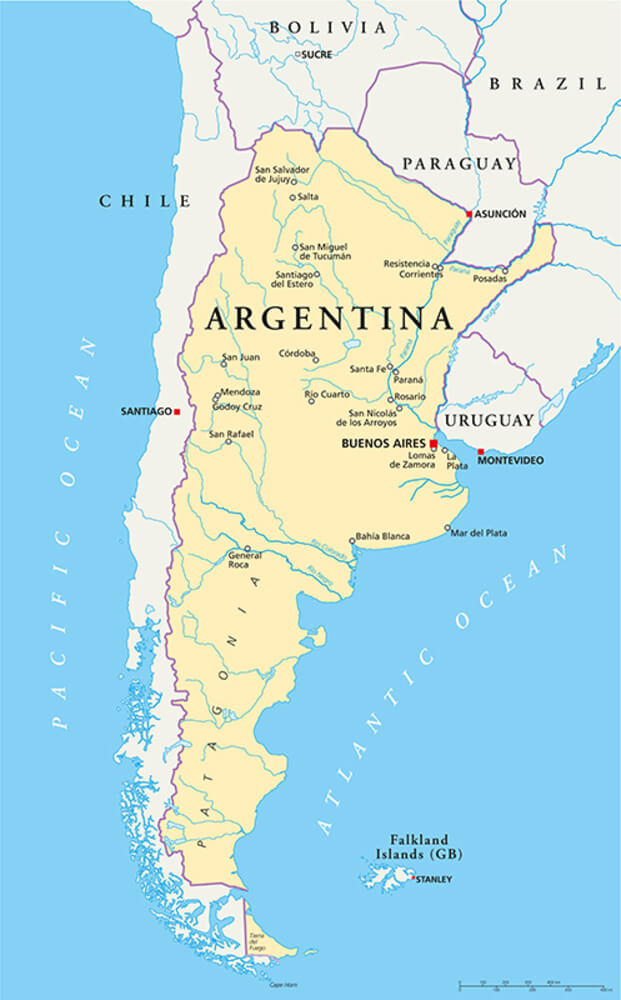 It is enough to look at some photos of the Iguazú Falls or the Perito Moreno Glacier to realize how rich the country’s hydrography is. However, it is not an easy task to recognize the River Plate Basin, which not only passes through Argentine territory but also through Bolivia, Paraguay, Brazil and Uruguay.

It is an arduous task to rebuild the course of this basin that flows into the Río de la Plata and receives the waters of two main rivers, the Uruguay and the Paraná. But this does not end all here, in turn these two rivers collect the flow of others such as the Bermejo, the Pilcomayo, the Paraguay and the Iguazú.

Surely, it is impossible to imagine so much mass of water, you just have to imagine that the water of the Falls that belong to the Iguazú River flows into the Paraná River. It is undeniable that the Basin is very similar to the song “Get out of there chivita chivita” with the large number of protagonist rivers.

In the south of the country, there is also the Negro River, the largest in Patagonia, or the Salado River, which is 2,210 km long. However, there are other sources of fresh water in the south and they are the well-known glaciers that are distributed along approximately 3,500 kilometers in the Andes Mountains and provide meltwater to Andean rivers. In this way, they collaborate in reducing the Patagonian drought.

Argentine hydrography will show you what its impact is on the biodiversity of all regions.

If you want a poster of Argentina to hang on the wall you can buy it here . 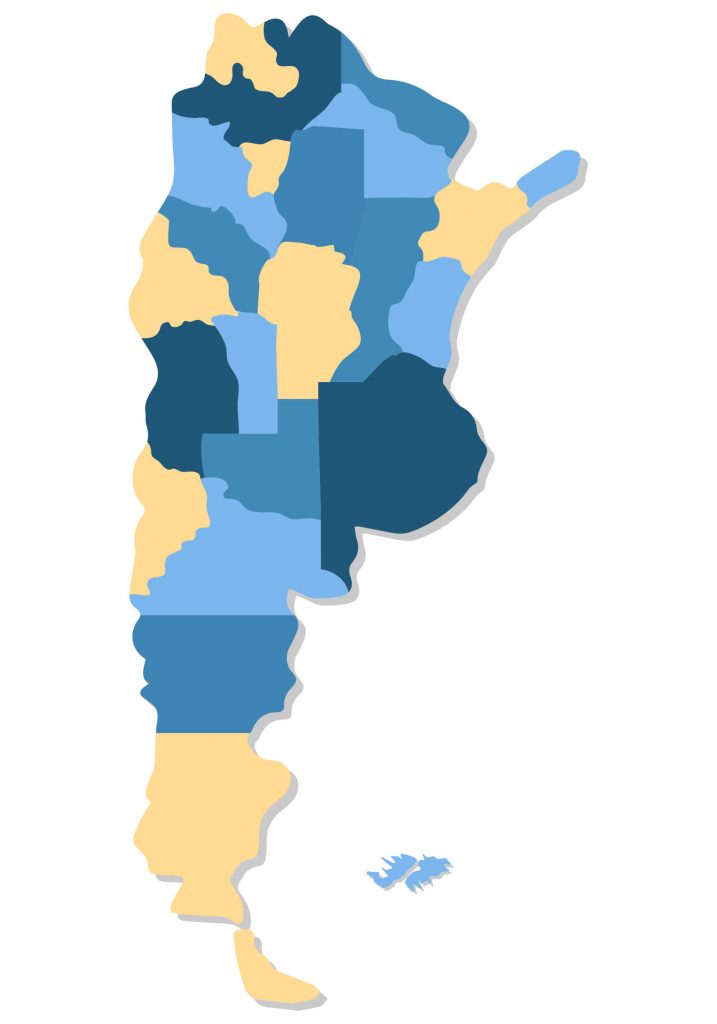 Surely, after seeing so many maps, I hope you can challenge your memory. What is the Argentine province that is shaped like a boot? Which ones border the mountain range? Or to which peninsula do right whales arrive between May and December? In this type of maps, you will not have delimitations or clarifications but you will be free to play with your knowledge and mark the reliefs, geographical features, rivers, provinces that you want. Since Argentina has a great variety in its food, you can even put together your own gastronomic map. Cheer up, the imagination is as wide as the Cuenca del Plata.

Each type of map is a mapping tool that best represents its purpose. You can download and print the map that works best for your history, geography or natural science activity.

If what you are looking for is a special map of Argentina and it is not on this page, you can write to us and we promise to get it. Whether you want it to learn more about the nation of mate, barbecue and good wine or for school. Just leave us a message.